BTC Price Is Stuck Below $42K as It Continues Sideways Move 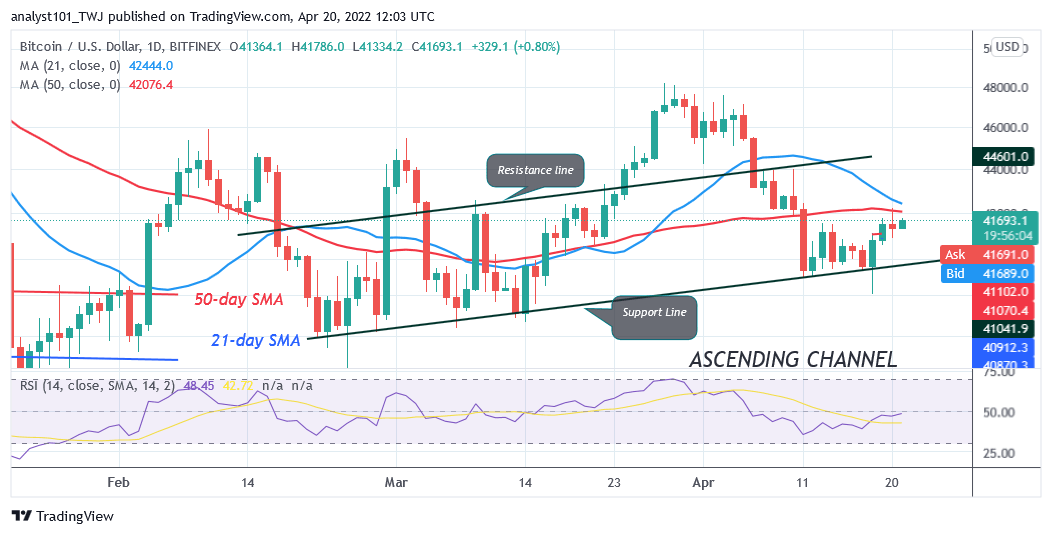 BTC Price Is Stuck Below $42K as It Continues Sideways Move

Bitcoin is still in a downward correction as Bitcoin continues sideways move. Since April 11, BTC/USD has been fluctuating between $39,200 and $42,000 price levels. For the past week, buyers have been able to keep BTC’s price above the $40,000 psychological price level.

Today, buyers have pushed Bitcoin above the $42,000 high but could not sustain the bullish momentum above it. The bulls are not relenting as they resume a fresh uptrend to retest the resistance. The largest cryptocurrency will rise closer to $45,000 high if buyers overcome the initial resistance at $42,000 high. Also, once the $45,000 resistance is cleared, a rally to the $48,000 overhead resistance becomes possible. However, if the BTC price turns down from the initial resistance, it suggest the presence bears at the recent high. The bears will push Bitcoin to the lower price region and commence a range-bound move for a few more days. Bitcoin is at level 48 of the Relative Strength Index for period 14. It indicates that it is in the bearish trend zone and capable of falling to the downside.

Meanwhile, the BTC price has continued to retest the resistance at $42,000 as Bitcoin continues sideways move. The current resistance level has been an overbought region of the market. In a strong trending market, an overbought condition may not hold. However, the crypto is likely to fall as sellers provide stiff resistance.