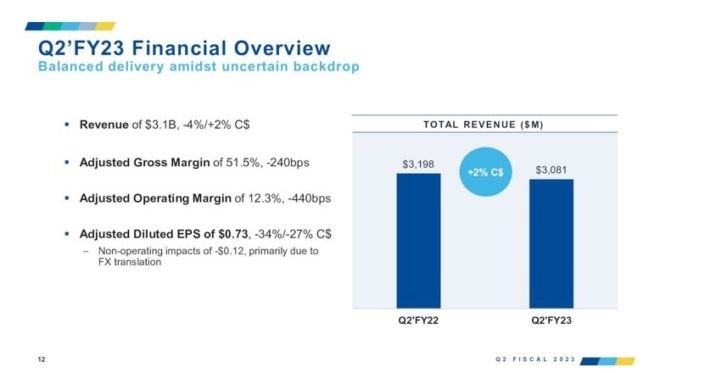 Investors looking for high-quality dividend growth stocks would be wise to examine the list of Dividend Aristocrats. These are companies in the S&P 500 Index, with 25+ consecutive years of dividend increases. There are just 65 such companies on this list.

You can download a free copy of the Dividend Aristocrats by clicking on the link below:

V.F. Corporation (VFC) is on the list of Dividend Aristocrats and has increased its dividend for 50 years in a row. V.F. Corp has been raising its dividend every year, including 2020, which was a very difficult year for the company and the broader economy, due to the coronavirus pandemic.

V.F. Corp has a recession-resistant business, and the ability to remain highly profitable even during economic downturns. This enables the company to continue raising its dividend every year, even when business conditions deteriorate.

V.F. Corp is a giant in the apparel industry. The company’s annual sales exceed $11 billion, but the company has humble beginnings. It started all the way back in 1899 and has seen many twists and turns in the nearly 125 years since.

The company was first started by John Barbey and a group of investors. Together, they created the Reading Glove and Mitten Manufacturing Company. During the 1960s, the company adopted its current name, V.F. Corp. It has a highly diverse product portfolio, with many category-leading brands.

In 2019, V.F. Corp separated its VF’s Jeanswear organization, including the Wrangler, Lee, and Rock & Republic brands. The separation was completed via a 100% distribution of shares to V.F. Corp shareholders, with the new entity named Kontoor Brands trading as an independent, publicly-traded company under the ticker KTB.

The current environment is challenging for V.F. Corp due to a difficult retail landscape. Mall traffic is declining, which has hurt brick-and-mortar retailers, many of which carry V.F. Corp’s products.

Moreover, V.F. Corp was severely hurt by the fierce recession caused by the coronavirus crisis and the unprecedented lockdowns imposed in response to the pandemic in fiscal 2021 (which ended in March 2021). Due to that downturn, the retailed incurred a 51% plunge in its earnings per share in that year.

Fortunately, thanks to the reopening of the economy and the immense fiscal stimulus packages offered by the government in response to the pandemic, V.F. Corp recovered strongly in fiscal 2022, more than doubling its earnings per share, from $1.31 in fiscal 2021 to $3.18 in fiscal 2022.

However, V.F. Corp is now facing another downturn due to the surge of inflation to a nearly 40-year high. Excessive inflation has imparted a triple hit on the retailer and thus it has formed a perfect storm.

First of all, the surge of inflation has greatly increased the cost of raw materials, the freight costs as well as the labor cost of V.F. Corp. In addition, high inflation has taken its toll on consumer spending, as it has caused a sharp decrease in the real purchasing power of consumers.

As if these two effects of inflation were not enough, high inflation also has an effect on the valuation of all the stocks, including V.F. Corp. Inflation reduces the present value of future earnings and hence it tends to reduce the price-to-earnings ratios of stocks. This has certainly been the case for V.F. Corp. Due to the triple impact of inflation on V.F. Corp, the stock has plunged 55% over the last 12 months, to a nearly 10-year low level.

In late October, V.F. Corp reported financial results for the second quarter of fiscal 2023. Its revenue decreased 4% and its operating margin shrank from 16.7% to 12.3% due to high cost inflation and great discounts offered to customers amid high inventories.

The inventories of V.F. Corp have spiked 88% over the prior year’s quarter, primarily due to supply chain issues and the impact of excessive inflation on consumer spending. 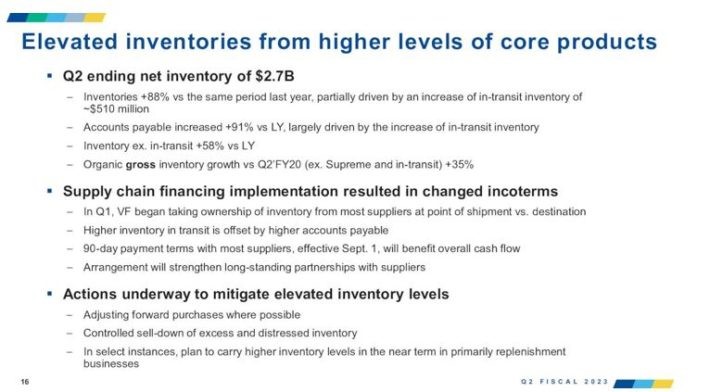 V.F. Corp is doing its best to keep its inventories under control, by pushing forward purchases where possible and by offering attractive discounts in order to enhance consumer purchases. We expect high inventories to continue to weigh on the margins of the company until inflation subsides.

On December 5th, 2022, V.F. Corp announced the exit of its CEO due to retirement and stated that it will search for his successor. The company also revised its outlook due to a greater-than-expected impact of inflation on consumer spending and the resultant excessive inventories, which will force the retailer to offer even deeper discounts to consumers.

V.F. Corp has multiple avenues for future growth, which include acquisitions, a renewed focus on core brands, and growth through e-commerce.

Direct-to-consumer sales are an emerging catalyst for V.F. Corp, especially since the coronavirus pandemic only accelerated the trend toward online shopping.

Before the pandemic and the ongoing downturn, V.F. Corp exhibited a solid performance record. Between fiscal 2010 and fiscal 2020, the company grew its earnings per share at a 10.5% average annual rate. This performance was driven by strong sales growth along with a steady expansion in operating and net profit margins.

As mentioned above, V.F. Corp is currently facing a perfect storm due to the multiple effects of inflation on the stock. Consequently, the company is poised to report its second-worst earnings per share in the last decade in fiscal 2023.

However, the Fed has clearly prioritized restoring inflation to its long-term target of about 2%, even at the expense of economic growth in the short run. Thanks to its aggressive interest rate hikes, the Fed is likely to restore inflation to its target range sooner or later.

Whenever inflation subsides, V.F. Corp is likely to recover strongly from the ongoing downturn. Its operating costs will moderate while consumers will increase their discretionary spending. In addition, the stock market will reset its price-to-earnings ratios. Overall, thanks to an expected recovery from the current downturn, we expect V.F. Corp to grow its earnings per share by 10% per year on average over the next five years off this year’s low comparison base.

V.F. Corp has a significant competitive advantage, namely the popularity of its premium brands. Thanks to the strength of its brands, the company has meaningful pricing power.

In addition, V.F. Corp benefits from operating in a steady industry. Many of the products V.F. Corp sells—such as workwear–have not changed much (if at all) in the past 100 years.

These qualities help V.F. Corp remain profitable even during recessions. For example, V.F. Corp kept on raising its dividend through the Great Recession, thanks to its consistent profitability.

The company’s earnings during the Great Recession are below:

V.F. Corp experienced a mild earnings decline in 2009, but returned to strong growth in 2010 and beyond. The company was much more affected by the pandemic, when it incurred a 51% plunge in its earnings per share, but it remained highly profitable and thus kept raising its dividend.

Shares of V.F. Corp have a current dividend yield of 6.7%. Given the annualized dividend of $2.04, the payout ratio is 102%. The current payout ratio is unsustainable in the long run, but the company will probably be able to defend its dividend thanks to its pristine balance sheet and its expected recovery from the ongoing downturn. Of course, if the retailer faces another major downturn, such as a severe recession, its dividend is likely to come under pressure.

Putting it all together, a projection of expected five-year total shareholder returns is below:

We expect a total annual return of 18.6% through 2028. This is certainly an attractive expected return for patient investors, who can maintain a long-term perspective during the ongoing downturn.

The company has been hit by sky-high inflation much more than most companies. This helps explain its vast underperformance over the last 12 months. During this period, the stock of V.F. Corp has plunged 55% whereas the S&P 500 has shed only 9%.

On the bright side, inflation has decreased every month since it peaked last summer. We expect it to subside even further in the upcoming quarters thanks to the aggressive policy of the Fed. This is likely to help V.F. Corp recover in the upcoming years.

The payout ratio of V.F. Corp has exceeded 100% for the first time in more than a decade but it is likely to revert towards healthier levels in the upcoming years. Given also the rock-solid balance sheet of the company, we consider its dividend fairly safe for the foreseeable future.

Overall, those who purchase V.F. Corp around its current price will probably be highly rewarded in the long run. The only caveat is that great patience may be required and hence the stock is suitable only for the investors who can ignore stock price volatility and remain focused on the long run.

Additionally, the following Sure Dividend databases contain the most reliable dividend growers in our investment universe:

Thanks for reading this article. Please send any feedback, corrections, or questions to support@suredividend.com.