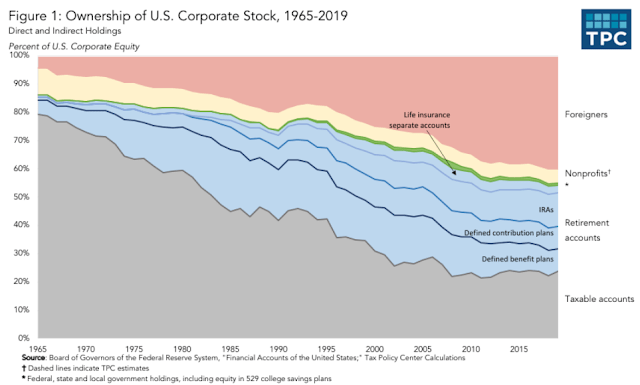 
I recently saw an interesting chart, that shows the evolution of ownership of US stocks over the past 55 years.

This study analyzed the ownership of US corporate equity and analyzed continuing trends. It found that foreigners now hold about 40 percent of total US equity, retirement accounts about 30 percent, and taxable accounts about 25 percent. Non-profits and US Government held about 5% – 6% of US Stock.

This chart shows that between 1965 and 2019, the percentage of US stocks held in taxable accounts has decreased significantly. It fell from almost 80% in 1965 to a little less than 25% in 2019. This has big repercussions for tax revenues, because it means that a much lower amount of US stocks are subject to taxes on capital gains and dividends than ever before. This means that raising taxes on capital gains or dividends will not impact shareholder decisions, as it would have 55 years ago.

In addition, this doesn’t show the percentage of taxable accounts, which would not be subject to taxes on qualified dividends and capital gains. For example, a married couple in the US, whose only source of income includes qualified dividends will not pay any taxes on the Federal level if they earn $105,000 in dividend income this year.

The amount owned in retirement accounts such as defined benefit pension plans, defined contribution 401 (k) plans and Individual Retirement Accounts (IRAs) has been steadily increasing in the past 55 years. The IRA was invented in 1974, and has definitely helped millions of Americans save for retirement, and defer a ton of taxes along the way. The defined contribution plans like 401 (k) have been around since 1978, and started gaining momentum in the 1980s. A large portion of US employees have accumulated trillions in assets in those retirement plans.

The taxation of 401 (k) distributions and IRA distributions varies. Typically, withdrawals are taxed at ordinary income tax rates. But it depends. That’s because since 1998, employees have the ability to invest through a Roth IRA or Roth 401 (k) plan, which allows for tax free growth and tax free withdrawals at retirement.

Defined benefit plans, which pay pensions to retired workers owned just 8% of US stock in 2019. That’s downs from 22% in 1985 and 16% in 2005. The benefit plans themselves do not pay taxes on dividends or capital gains. However, when they distribute pensions to retired workers, the employees pay tax on that income at ordinary income tax rates. If the employees are able to take the money in a lump sum instead, and roll it into an IRA however, they may defer payment for quite some time.

Foreigners own US corporate equity two ways: (i) foreign direct investment (“FDI”), which is

For example, Siemens AG, a German multinational, might wholly own Siemens USA, a “direct” investment. Or the Norwegian sovereign wealth fund might own Apple stock as a portfolio investment.

Based on my understanding, foreign investors do not pay taxes on capital gains to the IRS, provided they are not a resident of the United States. They may own taxes on capital gains to their local jurisdiction. However, most foreign investors do have tax withholdings on dividend income that is sourced from a US company. Each individual country has a different treaty with the United States on taxation of dividends, For example, Canadian residents pay a 15% withholding tax on US dividends in their taxable accounts. However, if they held US stocks in retirement accounts, they would not owe taxes.

I am unsure how certain large foreign holders of US stocks, like the Norway Sovereign Wealth Fund or the Swiss National Bank are taxed on dividend income or capital gains. I would assume they are going to be taxed like a US pension fund or a US not for profit.

The downside of the 40% ownership of US equity by foreigners is that we do not know what percentage is taxable on their side. We do know that while foreign investors in US stocks may not pay capital gains taxes to the US Government, they do have a very low threshold for paying an estate tax. If a foreign investor in US stocks has more than $60,000 at the time of their death, they are subject to a 40% tax.

The purpose of this discussion is to reiterate how everyone’s personal financial situation is very different. We may have rates of qualified dividends and capital gains set by congress at a certain level like 15% for example or 23.80%. However, that doesn’t mean that everyone pays that rate. In fact, it shows that only a small percentage of shareholders are going to be paying that much taxes on dividends or capital gains. That’s because only 25% of US stock is held in taxable accounts.

We often hear that it is better for shareholders if companies do share buybacks over dividends, because remaining shareholders do not pay taxes in this situation. The problem is that not everyone pays taxes on dividends. As we mentioned above, about 35% of stock is held in retirement accounts and non profits, which do not pay tax on dividends. Only 25% of stock is held by taxable accounts, and even for those we don’t know the percentage that have to pay taxes on dividends or capital gains. Everyone’s tax situation is different, which is why it is hard to determine the best decision that would work for everyone (hint: that doesn’t exist). 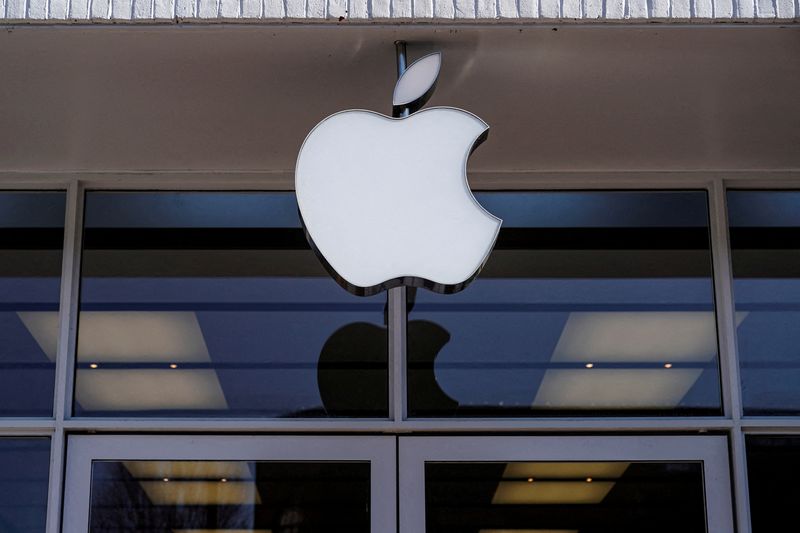