Will Advanced Micro Devices Ever Pay A Dividend?

Home » Blog » Will Advanced Micro Devices Ever Pay A Dividend? 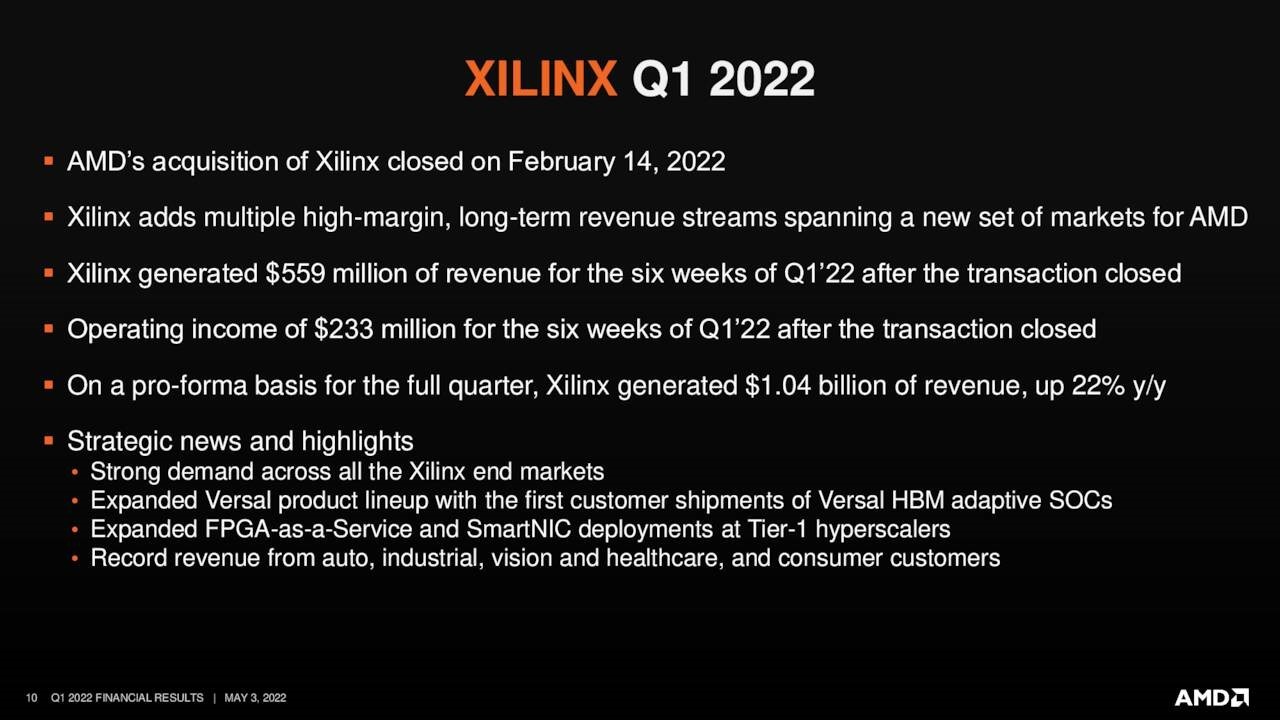 Will Advanced Micro Devices Ever Pay A Dividend?


Updated on May 19th, 2022 by Aristofanis Papadatos

Advanced Micro Devices (AMD) is a high-growth tech stock, with strong business momentum and exciting growth prospects ahead. The stock was trading below $2.00 in early 2016 but it rallied up to a peak of $164 in late 2021, thus rewarding its shareholders with life-changing returns.

The growth of AMD accelerated in 2020-2021 thanks to the coronavirus crisis, which forced people to work from home and stay at home more than ever, thus increasing the need for computers and gaming devices.

The pandemic also caused shortages in the global semiconductor market and thus offered ideal conditions for AMD, which raised its prices considerably. Thanks to the tailwinds from the pandemic, AMD reached an all-time high of $164 in late 2021.

However, the stock of AMD has plunged 41% off its peak, mostly due to its rich peak valuation and the ongoing bear market of the entire NASDAQ, which has resulted from the surge of inflation to a 40-year high and fears of an upcoming recession due to the aggressive interest rate hikes of the Fed. Nevertheless, despite its decline in the last six months, the stock of AMD still has a 744% return over the last five years.

With a market cap of $153 billion, Advanced Micro Devices is a large-cap stock.

You can download your free copy of the large-cap stocks list, along with relevant financial metrics like price-to-earnings ratios, dividend yields, and payout ratios, by clicking on the link below:

Income investors may have missed the exceptional returns of AMD, as the company does not pay a dividend. This is fairly common among growth stocks, particularly those in the technology sector, as it is much more profitable to reinvest the earnings in the business than to distribute them to the shareholders. Of the 500 stocks that comprise the S&P 500 Index, nearly 90 do not pay a dividend to their shareholders.

Income-oriented investors who are attracted by the extraordinary returns of AMD may wonder if the company will pay a dividend anytime soon. While the initiation of a dividend cannot be excluded at some point in the future, AMD is not likely to initiate a dividend for many more years.

AMD operates as a semiconductor company worldwide. Its products include x86 microprocessors as an accelerated processing unit (APU), chipsets and graphics processing units (GPUs). The major segment of AMD is the Computing and Graphics, which generates approximately two-thirds of the revenues of the company.

AMD currently has the strongest notebook processor portfolio in its history. Numerous AMD-based notebooks have come to the market in the last two years, as the company has expanded its presence in divisions like gaming, commercial and education, in which it has traditionally been a minor player.

Moreover, AMD acquired Xilinx in February, in an all-stock deal valued at $50 billion. As the value of the deal is 33% of the current market capitalization of AMD, it is obviously a major deal for the company.

Thanks to its acquisition of Xilinx, AMD has gained access to new markets, which include many high-margin, long term revenue streams.

In the first quarter of 2022, AMD grew its revenue by an impressive 88% over the prior year’s quarter, to an all-time high level, while earnings per share more than doubled thanks to record sales of EPYC and Semi-Custom processors. 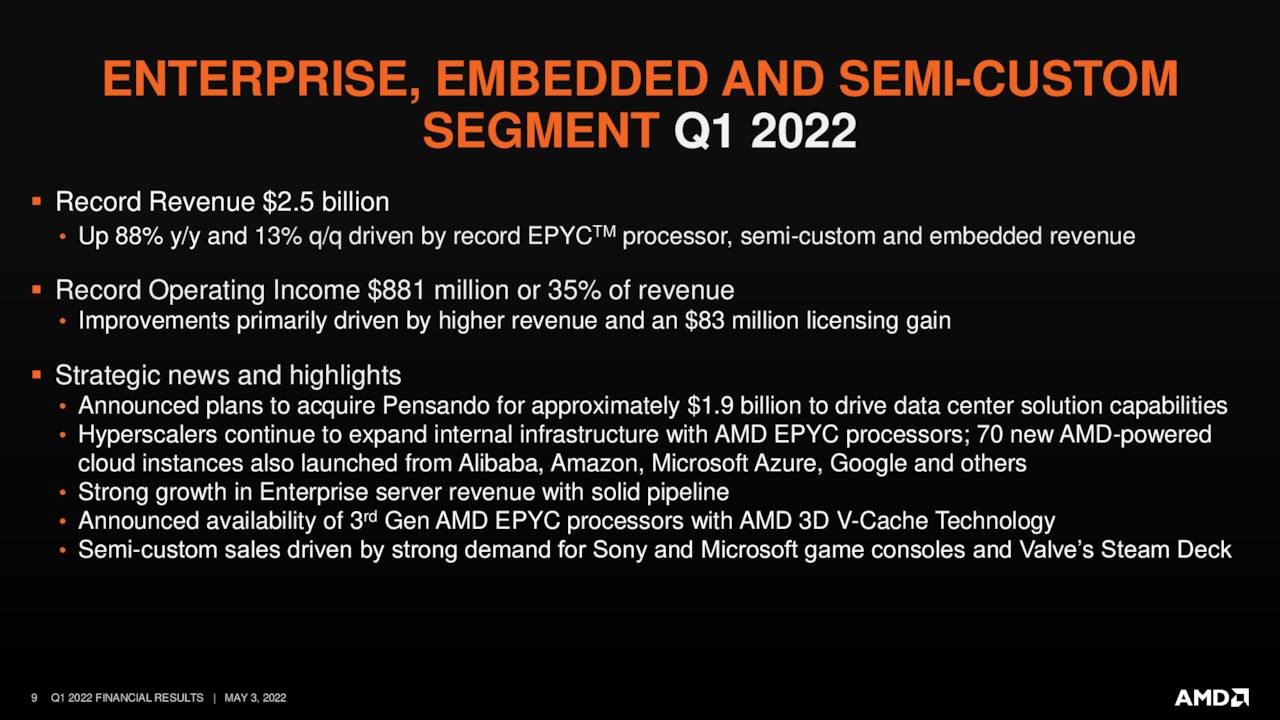 Notably, AMD has exceeded the analysts’ earnings-per-share estimates for 8 consecutive quarters. This is a testament to the relentless business momentum of the company and its strong business execution.

AMD greatly benefits from favorable fundamentals in the semiconductor market. There is record demand and limited supply in this market, thus creating perfect conditions for AMD.

The strong business momentum of AMD is clearly reflected in the revenue trend. 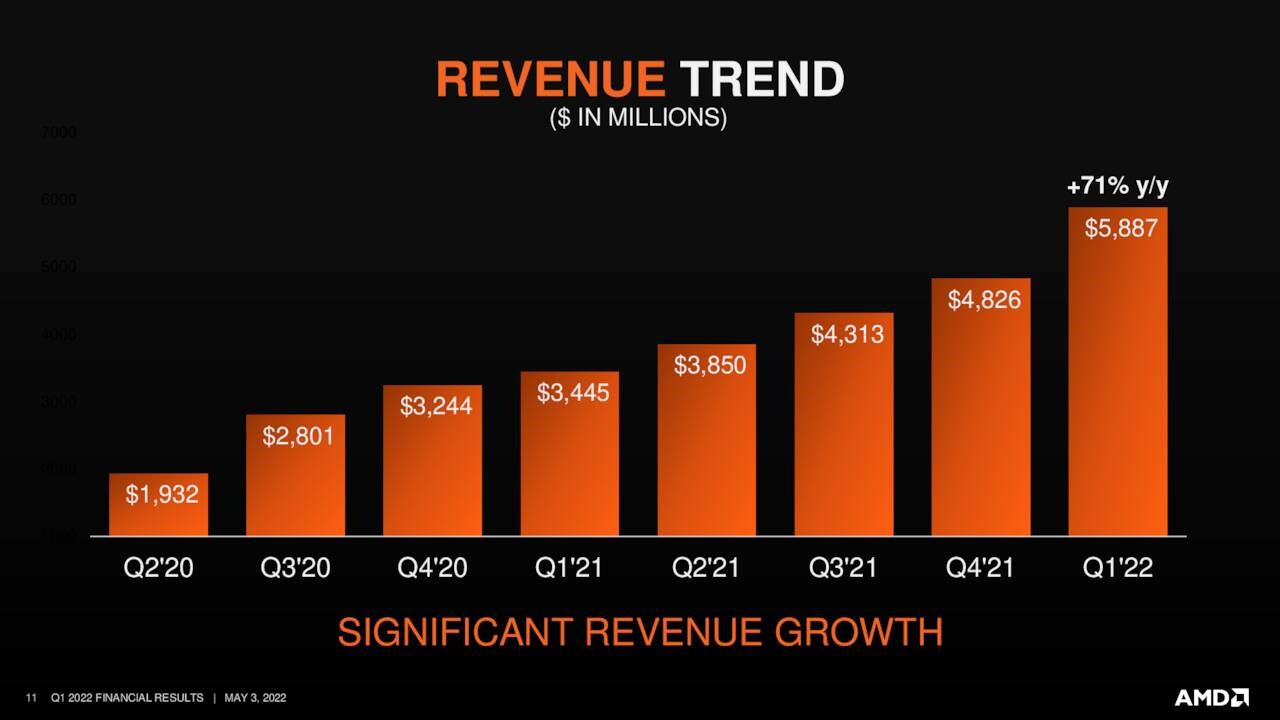 As shown in the above chart, revenue has grown in every single quarter in the last two years. It has temporarily decelerated in a few quarters but only due to seasonal issues related to the launch of new products.

AMD has also maintained strong gross margins for several quarters in a row. 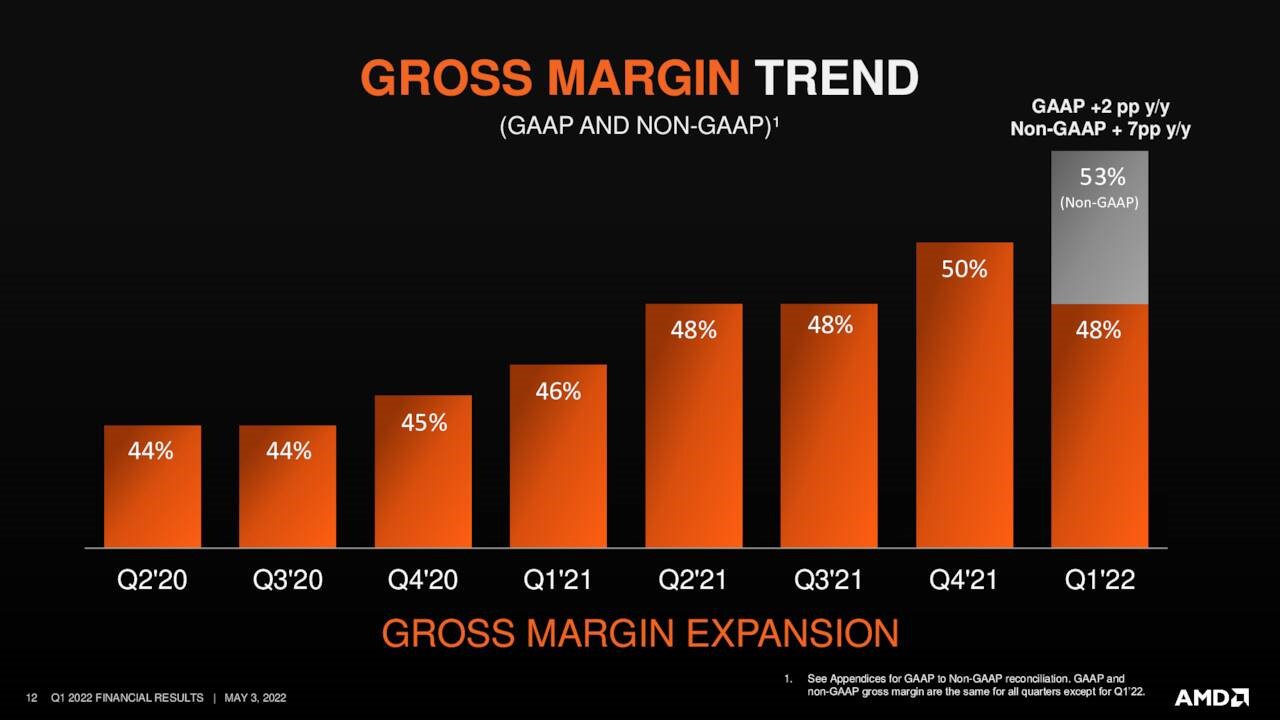 The strong margins result primarily from the dominant position of AMD in its business, as the company essentially operates in a duopoly, with Intel (INTC) as its main competitor.

Moreover, the strong business momentum of AMD is clearly reflected in its earnings-per-share growth over last year. 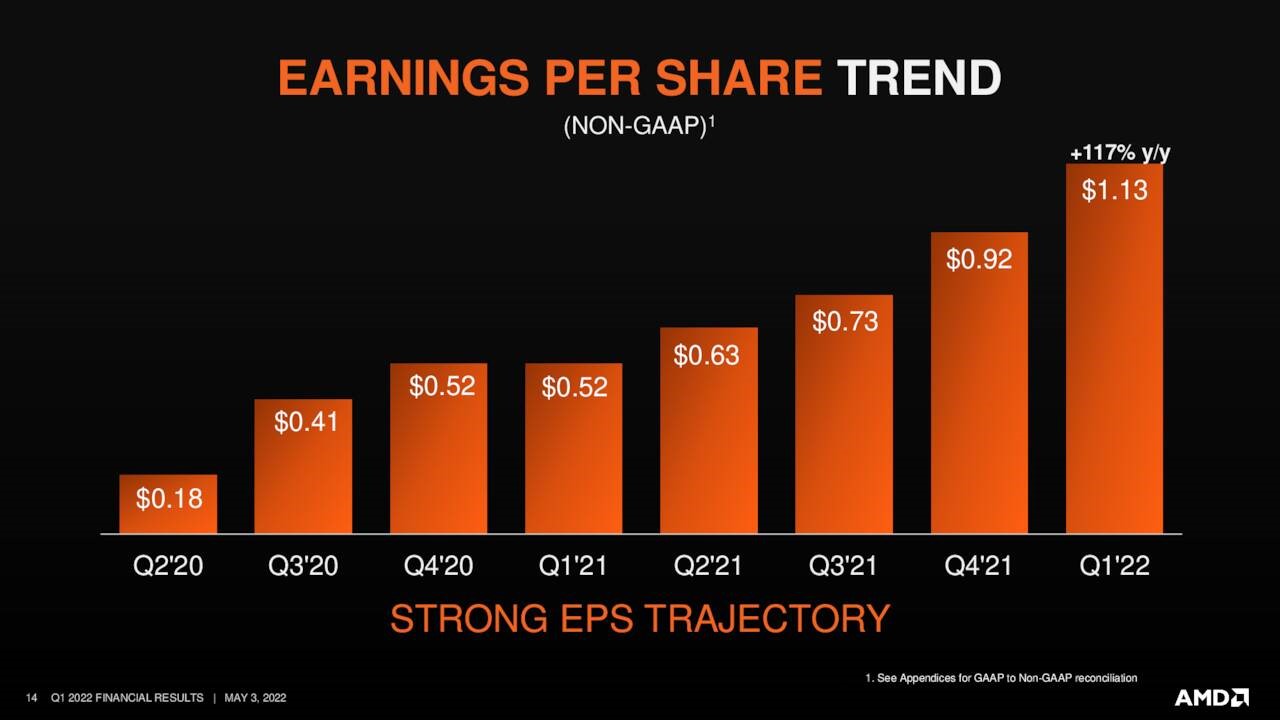 AMD has an enviable growth record thanks to its technological advances and the essential duopoly status in its business. The company has more than doubled its revenues over the last five years and has switched from a loss of -$0.60 per share in 2016 to an expected profit of $4.40 per share in 2022.

Even better, AMD has not shown any signs of fatigue, while it will greatly benefit from its major recent acquisition of Xilinx. Analysts have strong conviction in the growth trajectory of AMD, as they expect the company to grow its earnings per share by 13% in 2023 and by another 18% in 2024, on top of the 58% growth expected this year.

AMD essentially operates in a duopoly and thus it has a dominant position in its business. This position is enhanced by the growing scale of the company. As a result, AMD has a meaningful competitive advantage.

On the other hand, investors should always keep in mind that the tech sector is characterized by high uncertainty due to the fierce technological competition among its players. About six years ago, AMD was struggling to become profitable.

Fortunately, it has managed to create a sustainable growth trajectory in the last few years thanks to its technological achievements, which have rendered the products of the company vital components of the computer industry. However, in the tech sector, the risk of obsolescence due to the achievements of competitors is always present, particularly for investors with a long-term investing horizon.

Some tech stocks cannot pay dividends to their shareholders due to their lack of earnings. Uber (UBER) and Lyft (LYFT) have not managed to become profitable yet while Nikola (NKLA) has not managed to generate positive free cash flows yet. This is not the case for AMD, which has posted profits in the last four years and positive free cash flows in the last three years.

Will AMD Ever Pay A Dividend?

The primary reason behind the absence of a dividend is the high growth of AMD, which makes it much more profitable to invest cash flow back in the business instead of distributing it to the shareholders.

As AMD seems to have many years of double-digit earnings growth ahead, it is not likely to initiate a dividend anytime soon. Instead, it is likely to remain focused on its growth initiatives. Shareholders of AMD presumably are completely satisfied as long as the company keeps growing at a fast pace, without initiating a dividend.

Moreover, AMD incurred material losses in every single year between 2012 and 2017. This indicates the intense competitiveness in the tech sector, which is characterized by cut-throat competition most of the time.

High-growth companies do not offer a dividend for another reason as well. Their stocks usually enjoy such a rich valuation that a dividend is insignificant for the shareholders. To provide a perspective, AMD is currently trading at a price-to-earnings ratio of 22.

Therefore, even if the company distributes 30% of its earnings in the form of dividends, it will offer just a 1.4% dividend yield. Such a yield will be immaterial compared to the growth potential of the stock and hence it makes much more sense to reinvest earnings in the business to remain competitive.

AMD has become a high-growth tech stock in the last four years, with accelerated growth this year thanks to its high-quality processors, favorable business conditions and the acquisition of Xilinx. However, it is much more profitable to invest its earnings in its business than to distribute them in the form of dividends.

The company also needs to invest heavily in its business in order to remain competitive and defend its market share. As a result, investors should not expect a dividend from AMD for the next several years.

See the articles below for analysis on whether other stocks that currently don’t pay dividends will one day pay a dividend:

Thanks for reading this article. Please send any feedback, corrections, or questions to support@suredividend.com. 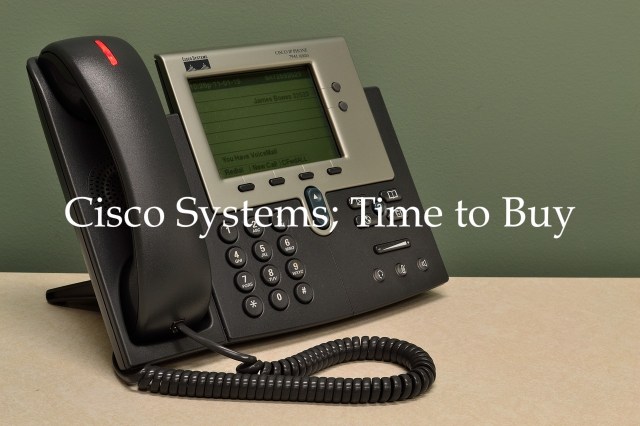 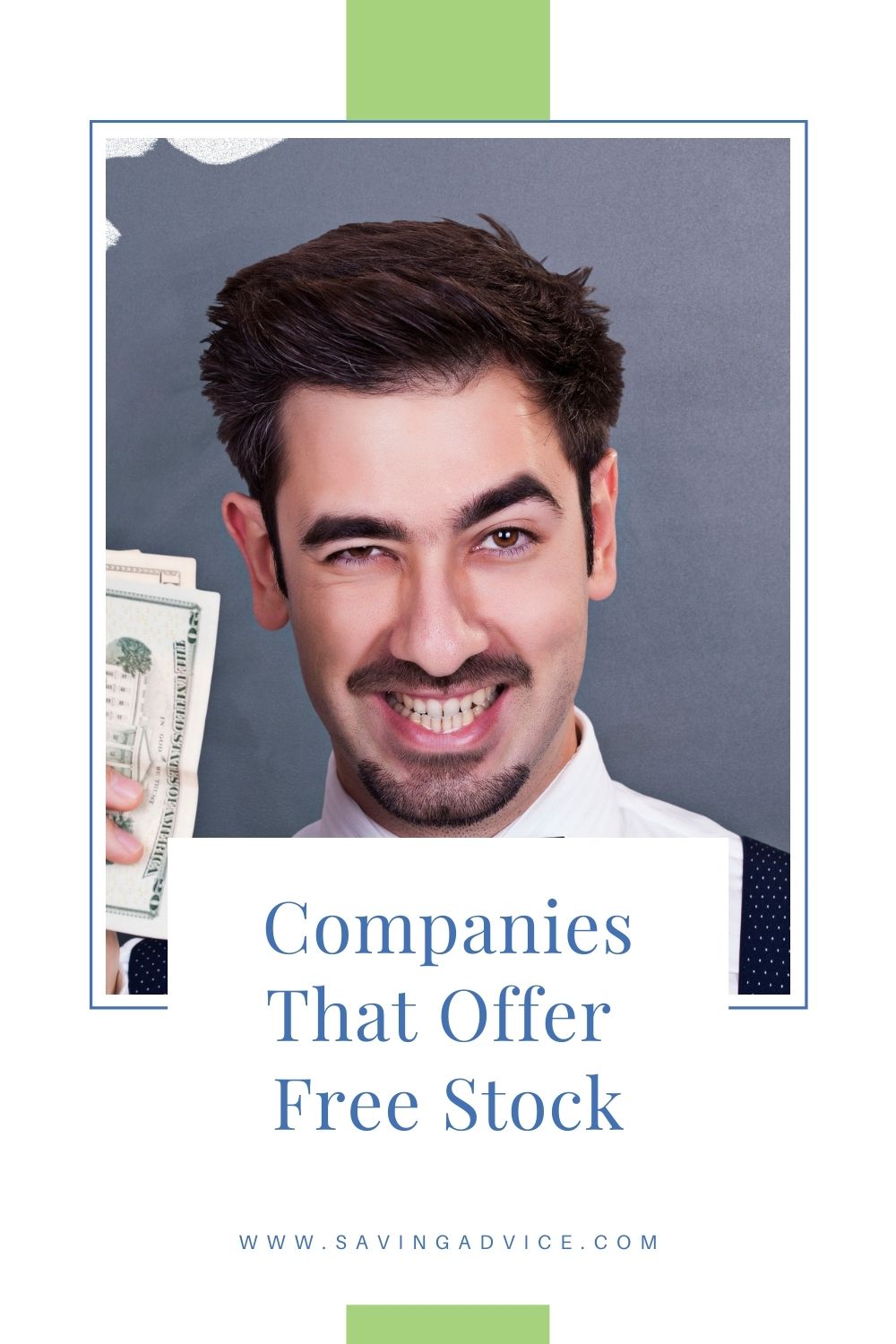 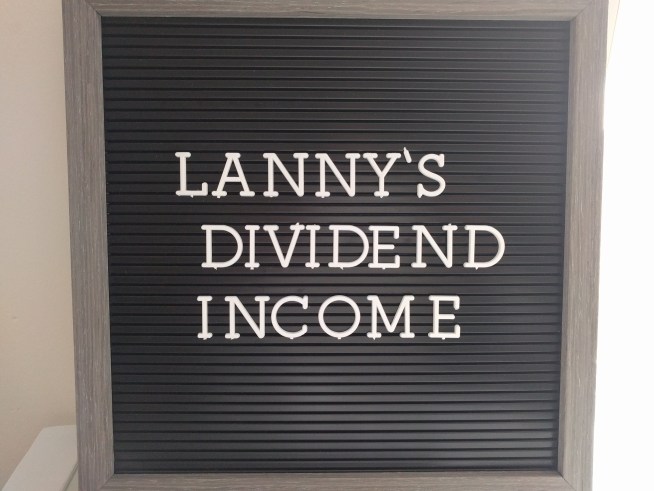